Proteome Factory AG has invented the next generation proteomics quantification technology MeCAT - metal coded tagging - for differential proteomics and quantification of biomolecules in collaboration with scientists of the Humboldt University Berlin. The joint invention was licenced to the Proteome Factory by the ipal Gesellschaft für Patentverwertung Berlin mbH.
The invention regards a method which enables high reproducible systematic, qualitative and quantitative characterization of proteomes and biomolecules. Thereby biomolecules are marked with novel reagents without the necessity of isotopic labeling. After that they are analysed with state-of-the-art mass spectrometric methods including ICP-MS with its extraordinary advantages in quantification.
ICP-MS (inductively coupled plasma mass spectrometry) allows an ultra sensitive (absolute) quantification of the metals (lanthanides) tagged to proteins on protein level. Thus the protein amount can be accurately determinated down to low attomol range which is at least 2 to 3 orders of magnitude more sensitive than other mass spec (peptide based) techniques. Still there is optimization potential to increase the sensitivy of MeCAT at least one to two orders of magnitude down to zeptomol amount by further improvements in LC-ICP-MS and FIA-ICP-MS (flow injection ICP-MS) instrumentation. MeCAT labeled peptides and proteins are separated by 2D electrophoresis, PAGE or LC followed by ICP-MS quantification. Advantageously is the use of the breakable polyacrylamide gels DPAGE (disolvable PAGE) of Proteome Factory because protein gel spots or bands can easily liquefied (fluidized) after protein separation and staining for FIA-ICP-MS analysis.
Multiplex analysis is performed by using different metals for tagging the analyzed samples. Currently a MeCAT duplex kit is available, a four-plex kit will follow soon as well as further multiplex kits in future.
ICP-MS has several unrivaled advantages in quantification compared to "classical" bioanalytical mass spectrometry. Beside the ultra senstive quantification the linear dynamic quantification range covers at least 6 to 9 orders of magnitude. Thermo Finnigan's high resolution ELEMENT XR ICP-MS increases this extraordinary quantification range by an additional three orders of magnitude, when compared to the ELEMENT2 HR-ICP-MS, to over 12 orders of magnitude. In addition to quantification of MeCAT metal tagged proteins other elements like phosphorus, sulfor, selenium (metalloproteins) can detected, for example for verification and accurate absolute quantification of phospho proteins (see below).


Recently a first patent was issued to Proteome Factory by the German Patent and Trademark Office.
For more information go to BioTop (German) or contact us.

MeCAT is suited for

The quantitative analysis of protein mixtures is pivotal for the understanding of variations in the proteome of living systems. Therefore, approaches have been recently devised, which generally allow the relative quantitative analysis of peptides and proteins. Here, we present proof of concept of the new MeCAT technique, which allowed the quantitative determination of peptides and proteins. A macrocyclic metal chelate complex (1,4,7,10-tetraazacyclododecane-1,4,7,10-tetraacetic acid, DOTA) loaded with different lanthanides (Me(III)-ions) was the essential part of the tag. The combination of DOTA with an affinity anchor for purification and a reactive group for reaction with amino acids constituted a reagent that allowed quantification of peptides and proteins in an absolute fashion. For the quantitative determination, the tagged peptides and proteins were analyzed using flow injection ICP-MS, a technique which allowed detection of metals with high precision and low detection limits. The metal chelate complexes were attached to the cysteine residues, and the course of the labelling reaction was followed using SDS-PAGE and MALDI TOF-MS, ESI-MS and ICP-MS. To limit the width in isotopic signal spread and to increase the sensitivity for ESI analysis, we used the mono-isotopic lanthanide macrocycle complexes. Peptides tagged with the reagent loaded with different metals coelute in liquid chromatography. In first applications with proteins, the calculated detection limit for Bovine Serum Albumin for example was 110 attomol and we have used MeCAT to analyze proteins of the Sus scrofa eye lens as a model system. These data showed that MeCAT allowed quantification not only of peptides, but also of proteins in an absolute fashion at low concentrations and in complex mixtures.

Many essential cellular functions such as growth rate, motility, and metabolic activity are linked to reversible protein phosphorylation, since they are controlled by signaling cascades based mainly on phosphorylation/dephosphorylation events. Quantification of global or site-specific protein phosphorylation is not straightforward with standard proteomic techniques. The coupling of capillary liquid chromatography (microLC) with ICP-MS (inductively coupled plasma-mass spectrometry) is a method which allows a quantitative screening of protein extracts for their phosphorus and sulfur content, and thus provides access to the protein phosphorylation degree. In extension of a recent pilot study, we analyzed protein extracts from the model organisms Arabidopsis thaliana and Chlamydomonas reinhardtii as representatives for multicellular and unicellular green photosynthetically active organisms. The results indicate that the average protein phosphorylation level of the algae C. reinhardtii is higher than that of A. thaliana. Both the average phosphorylation levels were found to be between the extreme values determined so far for prokaryotes (C. glutamicum, lowest levels) and eukaryotes (Mus musculus, highest levels). Tissue samples of A. thaliana representing different stages of plant development showed varying levels of protein phosphorylation indicating a different adjustment of the kinase/phosphatase system. We also utilized the microLC-ICP-MS technology to estimate the efficiency of a novel phosphoprotein enrichment method based on aluminum hydroxide, since the enrichment of phosphorylated species is often an essential step for their molecular characterization.

Inductively coupled plasma-MS (ICP-MS) and its combined use with molecular mass spectrometric techniques have become the most promising detection techniques in speciation studies. High sensitivity and element specificity of ICP-MS has the advantage of detecting trace amounts of the species of interest in complex matrices. This review is divided into two parts. In the first part, suitable use of ICP-MS either online or offline with currently used separation techniques such as HPLC, CE, and gel electrophoresis in speciation analysis is briefly discussed. In the second part, recent applications (1999-2005) of phosphorus speciation is presented to elucidate the importance of ICP-MS in separation methods and to illustrate its importance in nonmetal detection.

Both LC and capillary LC (CapLC) have been successfully interfaced with inductively coupled plasma mass spectrometry (ICP-MS). Gradients of acetonitrile and aqueous based solvents have been employed to separate several compounds of pharmaceutical interest. This paper will describe four application areas in the pharmaceutical industry, and examples will be shown where CapLC, LC and gel electrophoresis via laser ablation have been coupled with ICP-MS. The four areas highlighted in this paper are: (1) the use of derivatisation reactions to "make the invisible visible". Methods involving derivatisations with copper and iron will be described that can be used for the analysis of amines and carboxylic acids by ICP-MS. (2) The profiling of metal ion content (in particular bromine) in biological samples such as human plasma, this study will focus on the metabolism of bromine-labelled peptides (e.g. substance P). (3) The analysis of materials derived from single, solid-phase beads used in combinatorial chemistry, and (4) also discussed will be our findings from investigations into the use of laser ablation ICP-MS on the determination of protein phosphorylation on electrophoresis gel blots.

Development and characterisation of a new interface for coupling capillary LC with collision-cell ICP-MS and its application for phosphorylation profiling of tryptic protein digests.

A comparison of different nebulisers for direct hyphenation of capillary and nano liquid chromatography (Cap-LC, Nano-LC) and quadrupole-based collision cell inductively coupled plasma mass spectrometry (CC-ICP-MS) for phosphorylation profiling of tryptic protein digests is described. Helium was used as cell gas and specially tuned instrumental conditions were used to achieve background minimisation at the mass of phosphorus, because of kinetic energy discrimination of the interfering polyatomic ions. The proposed set-up is based on a modified capillary electrophoresis interface and a home-made 4 mL spray chamber. It enables the use of gradient conditions with a highly concentrated organic mobile phase as often used in protein phosphorylation analysis, without the need to apply membrane desolvation for removal of the organic phase or further background minimisation. No significant signal suppression or other negative effects caused by the organic mobile phase occur, because of the low flow rates used in Cap-LC and the robust plasma conditions of the CC-ICP-MS instrument. A tryptic digest of beta-casein was investigated as model compound to demonstrate the applicability of the proposed set-up for phosphorylation profiling in protein analysis using quadrupole based collision-cell ICP-MS as phosphorus-specific detector. Detection limits for phosphorylated peptides down to the sub picomole level were obtained. As a complementary technique, electrospray ionisation tandem mass spectrometry (ESI-MS-MS) with data base searching was used for further characterisation of the phosphorylated peptides detected.

Quantification of unknown components in pharmaceutical, metabolic and environmental samples is an important but difficult task. Most commonly used detectors (like UV, RI or MS) require standards of each analyte for accurate quantification. Even if the chemical structure or elemental composition is known, the response from these detectors is difficult to predict with any accuracy. In inductively coupled plasma mass spectrometry (ICP-MS) compounds are atomised and ionised irrespective of the chemical structure(s) incorporating the element of interest. Liquid chromatography coupled with inductively coupled plasma mass spectrometry (LC/ICP-MS) has been shown to provide a generic detection for structurally non-correlated compounds with common elements like phosphorus and iodine. Detection of selected elements gives a better quantification of tested 'unknowns' than UV and organic mass spectrometric detection. It was shown that the ultrasonic nebuliser did not introduce any measurable dead volume and preserves the separation efficiency of the system. ICP-MS can be used in combination with many different mobile phases ranging from 0-100% organic modifier. The dynamic range was found to exceed 2.5 orders of magnitude. The application of LC/ICP-MS to pharmaceutical drugs and formulations has shown that impurities can be quantified below the 0.1 mol-% level. 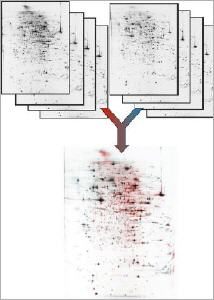 
** net price (all prices do not includes VAT for German Customers)